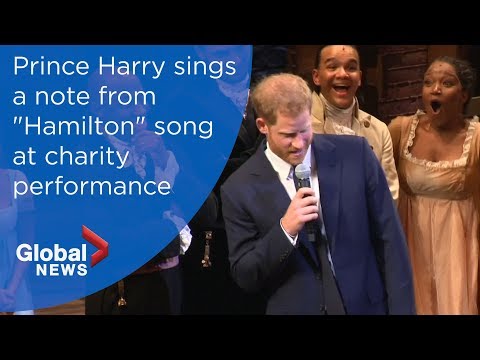 Prince Harry teases "Hamilton" audience in London with a song

Prince Harry delighted the London cast of hit musical Hamilton and its creator Lin-Manuel Miranda on August 29 when he sang the first note of King George III's song 'You'll Be Back'. The surprised cast could be seen laughing and applauding as Prince Harry turned to Miranda and said: "That's definitely not going to happen. He did try but I said no." Prince Harry and his wife Meghan attended the special performance to raise money for Sentebale, a charity he set up with Prince Seeiso of Lesotho, which works with children affected by HIV in southern Africa. For more info, please go to http://www.globalnews.ca Subscribe to Global News Channel HERE: http://bit.ly/20fcXDc Like Global News on Facebook HERE: http://bit.ly/255GMJQ Follow Global News on Twitter HERE: http://bit.ly/1Toz8mt