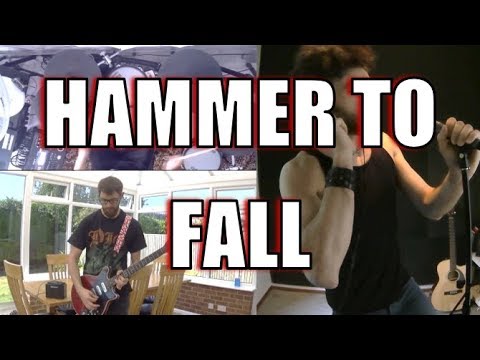 Ray Hermanni Lewis (Lead + Backing Vocals, Piano, Mixing and Video Edit) -- NL Alex Dominguez (Drums) -- ES Joe Oliver Brown (Guitars + Bass) -- UK Some parts from the original song are also used in this cover, including backing vocals and the snare drum sound in some places. 3 people from 3 different countries trying to cover Queen songs. Stolen from Wikipedia: "Hammer to Fall" is a 1984 song by the British rock band Queen. Written by guitarist Brian May, the song is the eighth track on their 1984 album The Works. It was the fourth and final single to be released from that album, although the single version was edited down by thirty seconds in contrast to the version on the album. Different sleeves were used to package this single and the live picture sleeve is now a collector's item. The song harks back to the Queen of old, with a song being built around a hard angular and muscular riff. The song features Freddie Mercury on lead vocals. The song peaked at number 3 in South Africa, and 13 in the UK. The song was featured in the film Highlander. "Hammer to Fall" was a concert favourite, and was the third song the band performed at Live Aid in 1985. The song features in the setlist of both The Works Tour and The Magic Tour. The full album version of the song appears on Queen Rocks while the single version appears on Greatest Hits II and Classic Queen. Ray - https://www.youtube.com/channel/UCSvSQ2tbSIOV-5u6-1gUrzw Alex - https://www.youtube.com/channel/UCuyNbNJTKAsVyPiHroYOihw